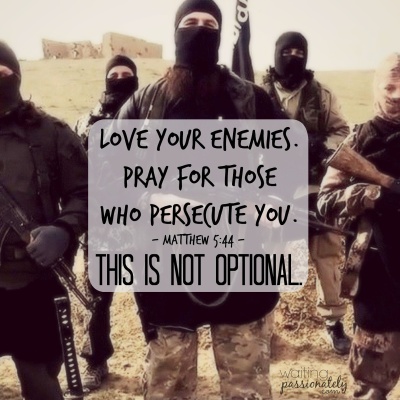 This is where many of you become offended, raise your eyebrows, scratch your heads, hit the back button, and truly believe I’ve gone off the deep end. And that’s ok. I began writing this in early September, but at the time I felt like I wasn’t supposed to finish it. Then today, God impressed upon my spirit to get it out there.

At this point, to remain silent is to be disobedient. Please know that each word I write is drenched with prayer and sincerity. May they fall on receptive ears, eyes, and hearts. And if they don’t, that’s ok. My job is only to write.

There is a discernible difference between righteous indignation and hate-fueled anger for the atrocities, persecution, and unspeakable acts committed by ISIS. It is right and good to be angered by the murder of innocent people. Harness the holy anger, that righteous indignation, and focus it on a proper response to terrorism. As Christians, we are given clear scriptural directives about how to respond to our enemies: with prayer and love. Not by amassing a cache of weapons, not meeting hatred with hatred, not vowing to kill and destroy. For those of us who have forgotten how Christ commands us to respond to those who hate us — who would like to blow us to bits, who seek our annihilation — let yourselves become steeped in the Word, not the world.

“But I tell you, love your enemies and pray for those who persecute you…” Matthew 5:44

“Do not take revenge, my dear friends, but leave room for God’s wrath, for it is written: ‘It is mine to avenge; I will repay,’ says the Lord.” Romans 12:19

As Christians, we do not get to pick and choose who receives God’s grace. He freely extends it to all…even the people we may not like. Especially those we are inclined to hate. God longs for the hearts of those fighting for ISIS, believe it or not. They, too, are created in his image. They, too, have eternity written on their hearts. If you truly feel burdened to bring the fight to ISIS, then let me introduce you to a recruiter friend of mine. He will happily sign you up to be involved in the business of fighting on behalf of the United States military — a truly noble profession.

These things are already happening. Pray that they keep occurring. There is a website dedicated to praying for Isis — they offer daily guided prayers for Christians. Get a group praying together. If you don’t truly believe that God is far more effective at “fighting” than man, it’s time to spend more time in the scriptures. It’s time to expand your horizons and deepen your faith. Praying these prayers will absolutely do that.

True radical Christianity looks nothing like a hate group. It is an absolute love fest. It is a broken-hearted people seeking the face of God. Radical Christianity looks like a people on its knees. If you want to defeat the enemy, stop fighting of your own accord. Let God bring the fight to their hearts by fundamentally changing your heart through prayer. It’s easy to sit and do nothing. It’s easy to spout hate and complain. It is a hard thing to beseech the throne and ask God to show them his face. Which response brings God glory and furthers his kingdom? 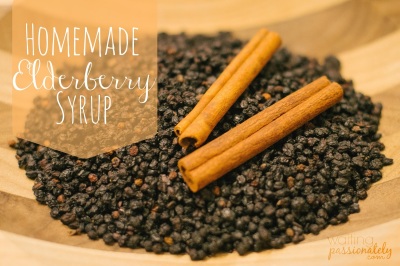 It’s that time of year! Coughs and colds can derail your family if left unchecked — prevention is the best medicine. I try to keep a mason jar full of this magic juice in the fridge all throughout the fall and winter. It’s taken me a few different attempts to tweak the recipe to perfection; I started off with two different recipes I found online, then adjusted the ingredients to fit my family’s palate.

Dosage
Our standard dose is 1 teaspoon for the kids, and 1 tablespoon for adults. Many recommend taking it every other day, or on weekdays but not on weekends. If the cold or flu strikes, take the normal dose every two to three hours until symptoms disappear. Or, if you’re like my husband, just drink shots from the jar.