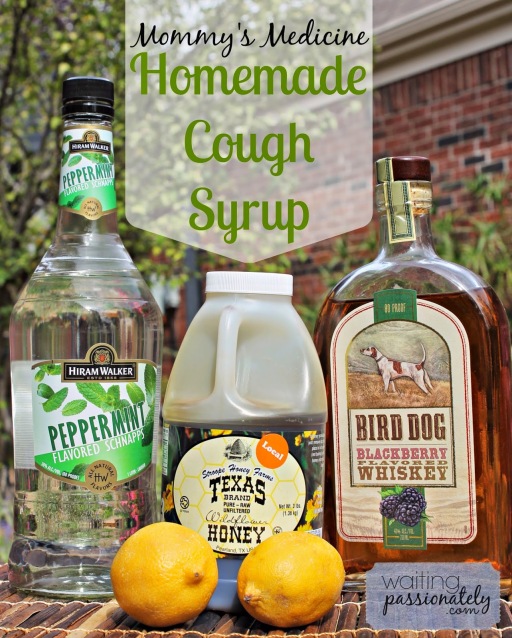 Texas has finally decided that summer is over…it only took until November. We were in shorts and t-shirts until Halloween! Now that we’re threatened with “cold” weather, the sniffles and those pesky night coughs tend to come-a-callin’. Be ready to combat sleepless nights with this quick and easy homemade cough syrup.

If you have a stocked liquor cabinet, this just got easier. If you’re like me, this recipe will require a trip to the local liquor store. Hopefully you won’t have to drag a five-month-old and two-and-a-half-year-old with you. If you do take a toddler along, mentally prepare yourself for him to announce,  “Mommy needs her medicine!” as you roll through the aisles. Let’s just say I wasn’t mentally prepared for that experience.

There are endless recipes for homemade cough syrups on the internet; I went through a handful, picking and choosing, until I compiled this simple recipe. Granted, I could have driven less than half a mile to one of the two pharmacies near my neighborhood, but my goal is to stay away from the unnecessary ingredients, preservatives, and dyes that are inherent with commercial cough syrups.

No heating, no steeping, no cooking required. Just mix the ingredients together and store in a mason jar. Since the alcohol acts as a preservative, you can leave it in the pantry — possibly up to a year. From what I’ve read, storing it in the refrigerator buys you an extra six months of shelf-life. 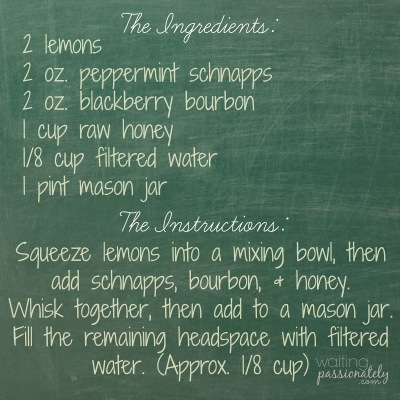