My sweet second son made his way Earthside on May 22, 2014 at 12:41pm. I had been preparing for his birth through two weeks of prodromal labor; I had steady, consistent contractions just about every evening from midnight to 5:00am. It was exhausting.

With Asher, I was on bed rest for half of the pregnancy due to preterm labor. Contractions became such a normal part of pregnancy that it was difficult to tell which ones were real versus prodromal labor. I knew things were different with Asher when my water broke – I was relying on that same indicator with Keane, knowing that it wasn’t a guarantee.

The week prior to Keane’s arrival, I made sure to see my beloved chiropractor, Terry Garcia, as often as possible. She came to my rescue Sunday afternoon (May 18th) after a particularly intense night of contractions. I felt like a new woman after her adjustment, so I made sure to see her every day until I delivered. Our daily visits lifted my spirits; she reminded me that my body was powerful and would do exactly what it needed to do at the perfect time. Those hugs and encouraging words were extremely helpful after being up for several hours each night with contractions that were one minute long, and one minute apart.

After putting Asher to bed Wednesday, May 21st, I stayed up to watch TV, work on laundry, and mentally prepare – I truly felt that May 22nd would be the day. My contractions were back, but not intense enough to call my doula. I pulled out the ol’ breast-pump and tried to encourage them, I drank lots of water, ate some carbs, and made sure to keep my bladder empty. At some point after midnight, Asher woke up and wanted Mommy snuggles, so I laid down with him. I snuck out of bed around 1:30am to go potty, and while walking thought the living room to get to the other side of the house, my water broke. Luckily, I was standing on the tile floor. Luckily, Mark happened to also be walking though the living room a minute or two later, and came to my rescue with a towel.

I waited forty-five minutes to text my doula, Maria Pokluda. Sleep is very important, and I hated to wake her up in the middle of the night…even though she fully expects it and doesn’t mind at all. I knew things weren’t intense enough to head to the hospital, so we decided to wait it out for a while. She was able to get a little more rest, but I was too excited. I bounced on the birth ball for a bit, then walked around the block several times at 3:30am. It was a beautiful, cool night and the birds were chirping just for me. I used that time to pray, and my excitement grew.

Sometime after 4:00am, I woke Mark up and told him we should probably take Asher to Nana and Papa’s house. We loaded up the car and dropped him off sometime before 5:00am, then made our way to Harris in Fort Worth. My original goal was to wait as long as possible to head to the hospital, but that put us in danger of hitting morning rush-hour traffic. Car rides in active labor are no fun. 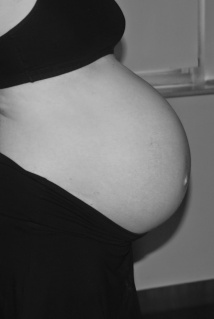 By 5:45am, we were checked in and I was dilated to a “loose four” per the nurse. She also informed me that my fore-bag had broken, but the rest of the bag of waters was still intact. I gave my permission to pop that sucker. By 6:45am, the midwife on call had been by to check my progress and break the bag, which proved to be unnecessary. The floodgates opened up when she checked me, and my contractions soon became more intense. My mother arrived just before 7:00am, and my doula wasn’t far behind her. Birth Boot Camp instructor, Tami Zubke, arrived around 9:30am to take photos and observe. (Her photographs helped me piece this birth story together after two weeks of minimal sleep!)

At 9:40am, the mood was light. Mark was napping on the couch, Maria and I were reminiscing about Asher’s birth, and Mom was getting excited. I walked the halls with Maria, and she helped me through the contractions for the next hour. The nurse began filling the tub around 10:45am. A few minutes shy of 11:00am, I was in the tub, progressing nicely. Maria massaged my sacrum. I ate a popsicle. Intense, but not unbearable.

By 11:30am, I was clinging to the side of the tub through each contraction and “vocalizing.” That’s a nice way of saying I was getting loud. So loud, in fact, that Mark snapped at two women in the hallway when they made a comment about my epidural not being strong enough. Near noon, Mom made the comment that she wouldn’t be surprised if Keane was born in the next thirty minutes. Knowing that my last labor went quickly, Maria agreed that anything was possible. I silently prayed that they were right. Soon, I started getting pushy…someone left the room to hunt down the nurse and midwife.

My midwife gave me the ok to start pushing at 12:15pm. Time seemed to stand still in the throes of these powerful contractions. I pushed through each one, then rested. I wasn’t myself at this point…I was in the zone and very primal. Thirty minutes of push, rest, push, rest. I felt his head crowning. Everyone gasped when they saw his headful of dark hair. Push, rest, push, rest — a life-giving cadence. With one last big push, I roared my baby into the world.

I lifted Keane out of the water and onto my chest, so proud of myself and so in love with my new son. 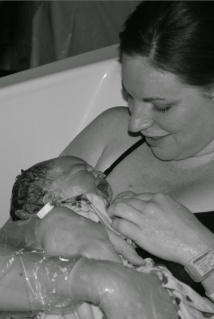